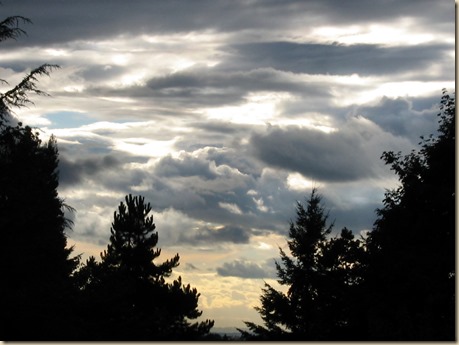 He knew before it happened. He and His Father were the only ones who did know. The knowledge brought great agony for Jesus, the perfect man, the Lamb led to slaughter. In the garden before he was arrested, he agonized over his obedience to the horrible, tortuous truth about to unfold. But even more unthinkable to Jesus was his brief separation from The Father…that terrible moment when He would become sin for the whole world. Was there any other way to accomplish what had to be done?

Then He went off from them about the distance of a stone’s throw and knelt down and prayed. “Father,” He said, “if you will, take this cup of suffering away from me (there must have been a long pause as the man Jesus waited for a reply different from what He knew to be God’s will). Not my will however, but your will be done.” (And then, in a remarkable example of God’s mercy) An angel from heaven appeared to Him and strengthened him. In great anguish He prayed even more fervently; His sweat was like drops of blood falling to the ground.”  (Luke 22:41-44) parentheses added

And then, in a tumultuous swirl, he was arrested, questioned, horribly beaten, convicted, condemned to death, mocked, hated, spat upon, forced to drag his own cross up crude roads, experienced excruciating pain of nails driven through his hands and feet, abruptly attached to the cross as the taunting continued…and then, beyond human understanding…forgave the very people who did this to Him as life was passing from his body.

Suddenly God blackened the unrelenting brightness of the mid-day sun for three hours! At the same time, the huge curtain hanging in the temple was torn in two! Then Jesus cried out in a loud voice, “Father in your hands I place my spirit.” He said this and died. (Luke 22:44-46)

A man named Joseph from Arimathea, who was waiting for the coming of the Kingdom of God, arranged to have the body of Jesus removed from the cross, wrapped in linen and placed in a tomb which had been dug out of solid rock and never been used. It was Friday and the Sabbath was about to begin.

Very early on Sunday morning, Mary Magdalene, Joanna, and Mary the mother of James arrived at the tomb of Jesus to apply the spices and perfumes to his body. They found the stone rolled away and did not find the body of Jesus in the tomb. Suddenly, two men in bright shining robes appeared and the women bowed down to the ground.

“Why are you looking among the dead for One who is alive? He is not here; He has been raised. Remember what He said to you while He was in Galilee: The Son of Man must be handed over to sinners, be crucified, and three days later rise to life.”

Then the women remembered His words, returned from the tomb and told all these things to the eleven disciples and all the rest. (Luke 24:1-9)

The impossible happened, Jesus was dead and now alive. Just as the Bible predicted, He was resurrected from the dead. His sacrificial death, the blood of the Lamb of God, provides eternal life, forgiveness of sins to all who believe.

Perhaps you are more hesitant to believe such a story, perhaps you are like the apostle Thomas who proclaimed, “Unless I see the scars of the nails in his hands and put my finger on those scars and my hand in his side, I will not believe.” (John 20:25)

A week later, Jesus appeared to Thomas and said, “Put your finger here, and look at my hands; then reach out your hand and put it in my side. Stop your doubting and believe.” Thomas answered Him, “My Lord and my God!” (John 20:27-28)

Now what? What is Jesus doing now, after His majestic resurrection? The answer is found in Hebrews 1:1-3 Long ago, at many times and in many ways, God spoke to our fathers by the prophets, but in these last days he has spoken to us by his Son, whom he appointed the heir of all things,through whom also he created the world. He is the radiance of the glory of God and the exact imprint of his nature, and he upholds the universe by the word of his power. After making purification for sins, he sat down at the right hand of the Majesty on high.

Who then will condemn us? Will Christ? No! For he is the one who died for us and came back to life again for us and is sitting at the place of highest honor next to God, pleading for us there in heaven. (Romans 8:34-35)